Sake in Traditional Japanese Culture | An Essay by Shirley Booth

“to drink for the gods is the chief act of worship, and thus drunkenness and religion are inseparably connected, as the more sake they drink, the more devout they are, and the better pleased are the gods. It does not appear that anything but sake is of sufficient value to please the gods”.

In Japan sake is more than just a drink.

The observation above was recorded by Isabella Bird, the Victorian writer and explorer, writing in her book Unbeaten Tracks in Japan.

In fact the country’s most famous creation myth revolves around sake.  It is said that  Japan was created by the great Sun Goddess, Amaterasu; but she and her brother Susanoo were being threatened by the Great Serpent of Yamata Lake. Legend tells us that Susanoo got the serpent drunk -  on sake: then when he was sufficiently drunk (after drinking eight vats) he slayed him with his sword.  Sake then can be said to be responsible for the actual creation of Japan. The fact that the Japanese believe it to be so shows how important it is to them and their culture.

In reality, rather than legend, the first written mention of sake occurs in a third century Chinese text, where the Japanese are described as partaking for ceremonial purposes only. However, this early sake was nothing like the clear liquid we know today.  It was called Kuchikami no sake - mouth chewing sake, where cooked rice was chewed and spat into a vat. The enzymes (amylase) in saliva converted starch in the rice into sugars, and airborne yeasts completed the transformation of these sugars into alcohol, in a process common to early cultures all over the world.

This chewing became an important and sacred part of early Shinto ceremonies, where the chewing had to be carried out only by virgin girls, who were considered messengers of the gods. Sake made in this way was called Bijin shu – Bijin meaning beautiful girl.

During the period 300-700 AD more sophisticated techniques were introduced from China, and by the 7th century brewing was becoming established in Japan.

Like monasteries in the west, Buddhist temples were the first centres of brewing, as they had a ready workforce, of monks, and plenty of land. But sake is most closely linked with Shinto, the pantheistic religion of Japan, which co exists with Buddhism.

Shinto belief reckons that all things, animate and inanimate, possess a spirit and have a god – a kami.  These gods must be appeased – usually with sake, so sake is a central part of all Shinto ceremony, ritual and religious celebration.

Before a new building is begun the cleared ground is consecrated in a Shinto ceremony called Jichinsai .The Shinto priest sprinkles salt to purify the land, and sake to appease the spirits. When a sumo fight is fought the winner drinks from a huge sake cup.  And when an election is won or a contract signed it’s celebrated with sake.

At festivals and on ceremonial occasions large kegs, or barrels, of sake are smashed open in a ceremony called kagami biraki  “breaking open the mirror”.Kagami means mirror, which the round lid is said to resemble, and biraki means to break open. This tradition of cracking open the barrel dates from days of the shoguns, when the warlords would gather their troops before battle and crack open a barrel for good luck, as this breaking open symbolises an opening to harmony and good fortune.

These days the most important occasion when sake is drunk ceremonially is in the traditional Shinto wedding.  The couple seal the marriage bond by exchanging three cups of sake three times, in a ritual called san san kudo – meaning three times three is nine. The three red lacquered cups represent Heaven, Earth and Humankind; and drinking from same cup indicates the couple’s willingness to share life’s troubles in the years ahead.

New Year is the biggest national festival in Japan, and naturally sake is a big part of the celebrations.   It’s traditional to visit the local Shinto shrine at midnight on December 31st, and celebrate with sake.  Barrels of sake are offered to the gods, and sake is served to the people from ceremonial gold kettles. The next day breakfast at New Year is celebrated with a special kind of sake called toso, brewed with herbs, and served from ceremonial lacquer cups called sakazuki.

A common misconception is that sake is a spirit. In fact it is not distilled, but brewed.

‘Brewed like a beer; drunk like wine’, it defies categorisation. With an alcohol content of around 15-19%, it’s made by a complicated process called multiple parallel fermentation.  Starch in the rice is turned into sugar by the action of enzymes from a mould called aspergillus oryzae, and the addition of yeast turns the sugar into alcohol: and all this takes place at the same time, in the same vat.

It’s a delicate and difficult process requiring constant attention, and generations of expertise which has been refined over centuries.

Modern Premium Grade sake is categorised according to the degree to which the rice is polished (or milled) before brewing. Highly polished styles, where the rice is milled down to 60% or less (remaining), are called Ginjo and DaiGinjo. They are characterised by delicate, fragrant, floral and and fruity aromas.

These styles often have a little (up to 10%)  brewer’s alcohol added - to stabilise and enhance the flavours and aroma. But a further categorisation, Junmai, refers to sake with no added alcohol, sometimes described as ‘pure rice sake’.

Another categorisation concerns the style of brewing, in particular the starter mash. Yamahai and Kimoto are both made with old fashioned slow methods, producing a style of sake which is more complex, dense, earthy and more full bodied, sometimes with ricey or lactic notes.

Honjozo is polished down to only 70% and Futsushu is ‘everyday sake’ rather like vin de table.  All these different styles can be enhanced by drinking from a particular cup.

“Why are sake cups so small?” one is frequently asked. The sad little haiku poem above tells us why.  Drinking alone is considered undesirable – a miserable state: akin to when there are no blossoms and no moon - nothing to celebrate.  Sake is meant to be drunk with others, and pouring for each other is part of the ritual.  So the smaller the cup, the more often you have to re-fill for each other, which creates more chances for interaction, and engenders conviviality.

It follows that pouring for oneself is therefore frowned upon. When pouring, the bottle should be held with two hands, and the person receiving should likewise lift the cup with both hands, in an almost prayer-like stance, to show gratitude and humility.  Using only one hand would be considered rude – perhaps because it is a reminder of the days when one might have pulled a sword with the other!

- NOT getting drunk is unmannerly.
- Be courteous to those who serve you.
- Sake serving should be carried out from the right front in full view of other guests. Pouring furtively from the side indicates - some special intimacy excluding others, and should be avoided
- Pour with both hands.
- We must bear in mind that a promise at a drinking party disappears as a sake drinker becomes sober.

The Japanese no longer get habitually drunk and incapable, as Isabella Bird seemed to observe; but even so, it is interesting to note that drunkenness doesn’t carry the stigma in Japan that it does in the west. Being drunk can be a defence of bad behaviour (barring criminality of course) and is easily forgiven and forgotten.

Sakazuki is the classic shallow wide cup, often of lacquer, which is used on ceremonial occasions such as during the marriage ceremony. This is probably the oldest style, and definitely the most elegant, with its echoes of the refinements of the nobility and Imperial court at Kyoto during the Heian era (794 -1185). In practical terms it’s best for Futsushu (the standard everyday sake) Honjozo and Junmai, as the delicate fragrance of a Ginjo would be lost here. As well as lacquer sakazuki is made in glass, porcelain, wood and metal.

In contrast, the straight sided and deeper porcelain cup, the kikichoko, is designed specifically for tasting competitions, as the shape captures the essential characteristics of a sake, helping the aromas to reach the surface. The blue concentric circles on the inside base are an aid to judging the clarity and colour of a sake.

The small ochoko is designed for more formal occasions, often when one is seated on the floor, and sake is taken in small sips, in a more feminine and elegant way. It is suitable for warm, room temperature and chilled sake.

Guinomi became popular in the Edo era (160 to 1868) and are designed for more casual drinking, when sake is gulped as opposed to sipped.  Guinomi are bigger than ochoko, and made in a variety of shapes and materials. Robust studio pottery in earthenware and stoneware is a good choice for drinking Junmai, Kimoto and Yamahai as it absorbs and softens the flavours.  Porcelain, china and glass are more suitable for DaiGinjo and Ginjo.  In general wooden and lacquer cups are warming and comforting in winter, softening acidity; whereas glass and metal are suitable for summer, enhancing acidity.

The bajohai,or ‘horseback cup’, has a short stem with a shallow cup and, like much of Japanese ceramics, is influenced by Korea.  It’s designed for warriors on horseback, as the cup is easier to hold with one hand whilst riding!

The traditional size of a sake bottle is 1.8 litres, or a sho, and traditional sake ware is based on this measurement. One tenth of a sho is a go or 180 millilitres, and this is the capacity of the standard flask called a tokkuri.  This is the best serving vessel for warm sake, as the narrow neck holds the heat in, but it can be used for room temperature, or even chilled, sake.

180 ml is also the capacity of the square box known as a masu. This was originally used to measure rice, but it came to be used for drinking sake on ceremonial occasions such as festivals.  Sometimes though it’s used to show generosity, perhaps to a special customer. Sake is poured into a glass standing inside a masu, and filled to overflowing. Fittingly, the sound of ‘masu’ also means ‘to increase’ so this habit is particularly appropriate.  Take the time, if you are served like this, to observe the difference in the sake drunk from the glass and that from the cedarwood masu.

Katakuchi is a one-lipped cup used to serve room temperature or chilled sake.  The large surface area lets the sake breathe, and can slightly warm up an over-chilled sake, changing its character as it does so.  Chirori is atraditionalpewter warming can, which should be stood in hot water to warm the sake.  A glass carafe with an indentation to hold ice cubes is sometimes used to keep chilled sake cool without diluting it.

The Japanese still have a charming custom, when drinking in casual izakaya (drinking taverns), of bringing round a basket of assorted choko and guinomi, so you can choose your own, according to your mood.

Sake, how it is served, and what you drink it from, are still important aspects of Japanese culture.  I hope they always will be.

To learn more about sake and attend sake themed events, and to join the British Sake Association, visit www.thebritishsakeassociation.org 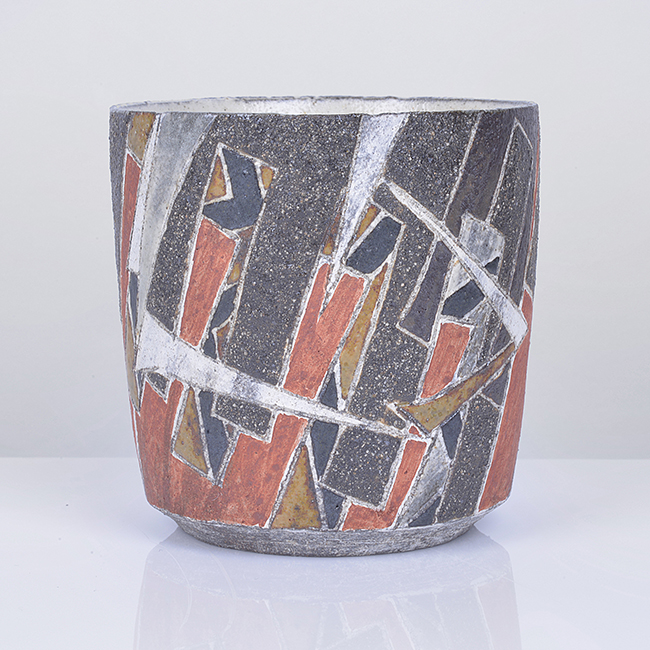