Pioneers: 101 years of the Leach Pottery

We are delighted to be sponsoring the upcoming exhibition at Court Barn:

Court Barn: a museum of Craft and Design in the North Cotswolds

Pioneers: 101 years of the Leach Pottery

As a young man Bernard Leach (1887-1979) spent eleven formative years in Japan and the Far East where he was introduced to the art and craft of oriental ceramics. He became a serious potter and – at the invitation of Frances Home who was setting up a Guild of Handicrafts to work alongside the existing artists’ colony at St Ives in Cornwall – returned to Britain in 1920.

With Shoji Hamada, a young Japanese colleague, Leach set up a pottery near St Ives making functional wares showing a strong oriental sensibility in both their form and glazes. They captured the spirit of the moment – as this exhibition shows many British studio potters in the early 20th century including Edward Baker, Alfred Hopkins, Dora Lunn and Reginald Wells were trying to reproduce the rich glazes they admired on Chinese and Japanese wares.

Leach’s work however had an authenticity developed during his time in Japan. He wanted to combine the best of both eastern and western traditions and explained his philosophy in his influential publication ‘A Potter’s Book’ (1940). Together with his son, David, he also created a range of standard wares that were sold alongside pots as works of art. He took on pupils and apprentices such as Michael Cardew, Katherine Pleydell Bouverie, Kenneth Quick and William and Scott Marshall, all of whose work is included in this exhibition. Bernard Leach became the towering figure of the Studio Pottery movement and many potters still acknowledge his inspiration. We have chosen four contemporary potters – Matt Foster, former apprentice and now production manager at the Leach Pottery; Kat Wheeler, formerly at the Leach Pottery but now working independently; Jack Doherty in Cornwall; and John Jelfs at the Cotswold Pottery at Bourton-in-the-Water, Gloucestershire – to bring the exhibition up-to-date.

Bernard Leach and the studio pottery tradition are particularly relevant for Court Barn as it was a visit with Leach to Russell & Sons at Broadway in 1926 that led to Michael Cardew setting up the Winchcombe Pottery, now represented in the museum’s permanent collection. This celebratory exhibition will provide an overview of the hundred-year history of the Leach Pottery from its precursors to its impact on contemporary makers. Most of the work on show has been borrowed from private collection or from the potters themselves. A short film of Leach at St Ives in the 1950s will also be screened.

We are grateful to all the lenders, to Marty Gross films and particularly to our sponsors, Maak Ceramics.

For details of events please see our website www.courtbarn.org.uk or phone 01386 841951 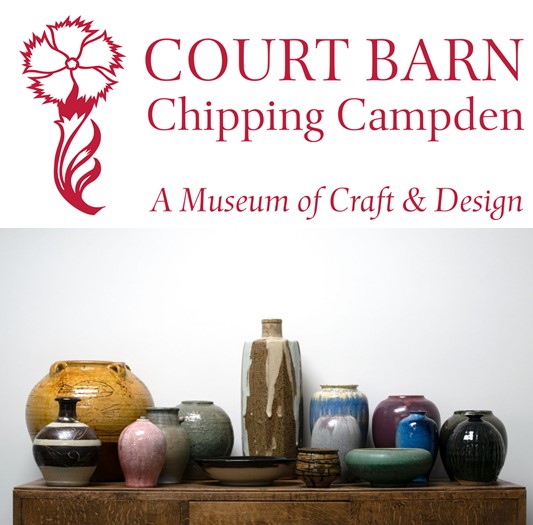