Cardew was born in 1901 in Wimbledon, London.

He first saw pottery being made in the workshop of Edwin Beer Fishley whilst on holiday in Devon and learnt to make pottery on the wheel from Fishley's grandson. His father, Arthur Cardew collected Devon country pottery.

Cardew became Bernard Leach’s first student at the Leach Pottery in St Ives in 1923, where he worked for three years. He established his pottery, Winchcombe Pottery in Gloucestershire in 1926, where he concentrated on making slip-decorated earthenware, making traditional and affordable domestic pieces with increasing success. In 1939 he set up a new pottery in Wenford Bridge, Cornwall, where he switched to producing stoneware pieces.

In 1942 Cardew was asked to establish and run a large pottery at Achimota College in Ghana, Africa. From 1942 to 1948 and again from 1950 to 1965, Cardew worked in Africa, first on the Volta River in Vumë, Ghana and later at Abuja in Northern Nigeria as Pottery officer to the Nigerian Government, training local craftsmen and introducing wheel-made pottery and stoneware to the region. During this time Cardew continued to develop his own work, adopting many forms influenced by traditional African pottery.

On his retirement Cardew returned to Wenford Bridge, however, he continued to travel extensively, making pots, demonstrating and teaching. His autobiography ‘Pioneer Potter’ was published in 1969. 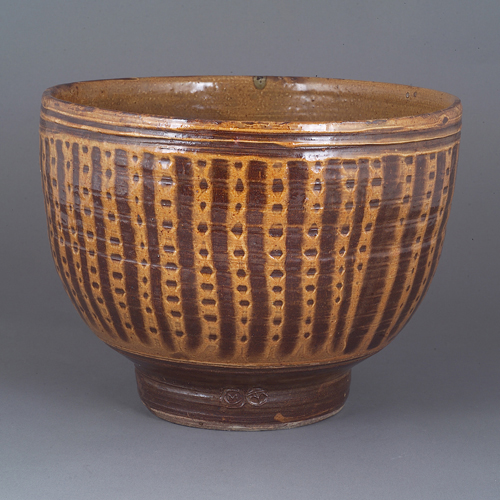