Claire Curneen was born in Ireland in 1968.

Early studies in ceramics and applied art in Belfast were followed by an MA in Ceramics at the University of Wales Institute Cardiff, graduating in 1992.

As one of the UK’s foremost ceramicists Claire Curneen’s work is distinct for its focus on the human form. Spanning nearly 20 years as a practising artist, Curneen’s works, ranging from small scale porcelain pieces to a large terracotta figure installed on the exterior of a Guildhall, in her own words Curneen explains how, "My work with the figure is grounded in the exploration of the human condition, focusing on aspects of the religious and the ceremonial. With semi-autobiographical references, the figure serves as a vessel for the physical and spiritual being."

Notable for her application of hand-building, with a textural finish that reveals the artist's hand with running drips of glaze and gold lacquer accentuating the rich quality of the porcelain. Referencing Christian Iconography and Ideology as well as early Italian Renaissance paintings, these figures balance bold narratives with elements of fundamental human experiences: love, loss, suffering and compassion. Her work commands a quiet yet charged presence.

In 2011 Curneen received one of the Arts Council of Wales’s most prestigious accolades, a Creative Wales Ambassador Award, and has embarked upon a new body of work inspired by research she will be conducting into the National Museum of Ireland’s collections.

Curneen’s work can be seen in over 20 public collections, including the Victoria & Albert Museum, London; National Museums and Galleries of Wales, Cardiff; Taipei Ceramics Museum, Taiwan and the Crafts Council, London. She is also a Senior Lecturer at the Centre for Ceramic Studies, Cardiff Metropolitan University. 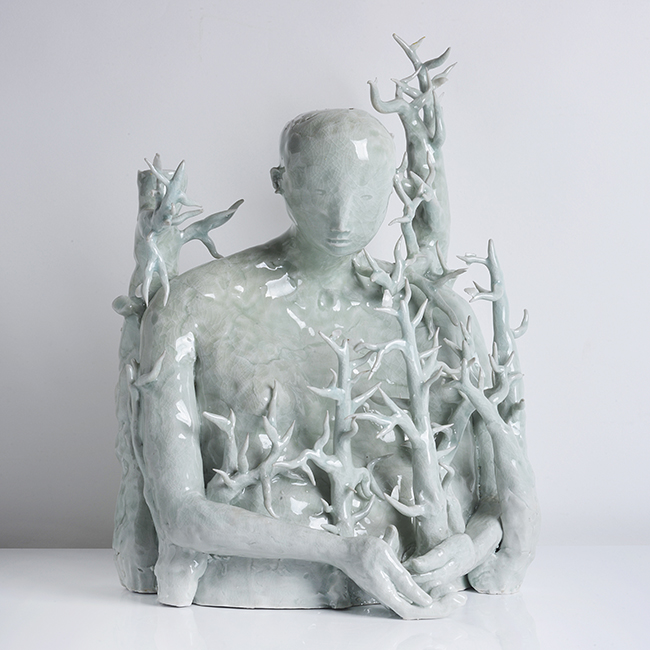